Kaii
An Aberration ( 怪異,, Kaii) is a chaotic event that causes trouble to those it interacts with.

When certain items or living beings come into contact with a large concentration of Curse, they typically turn into troublesome beings that can throw their surroundings into a great turmoil. The most common aberrations are either Minor Monsters, living creatures like animals that became corrupted by the negative influence of the curse, or Amasogi that are born from the desires of a human being placed upon a certain object. Other less common types of aberrations include Tsugumomo that became a "Man-Eater", or a "Possessed One", human beings possessed by Amasogi.

The aberrations can be incredibly varied, and sometimes they might not be particularly dangerous, but just troublesome. Oftentimes, however, they can be powerful creatures born from a malevolent goal, resulting in them being very violent and could threaten the lives of those around them. If left alone aberrations, especially those of higher peligrosity, would be an extremely destructive and chaotic natural disaster so, in order to deal with them, specialised groups of people called Exorcists were born. The exorcists are gifted warriors, capable of eradicating aberrations while remaining unknown to the common population, and they're in charge of deleting aberrations under the guidance of temples like Tsuzura Temple.

The temples determine how dangerous aberrations are by grading them through "Kyus", with 9 being the lowest priority, weakest and least dangerous type and increasing from there the lower the number is. Above all these there is also a special type known as "Frozen Stock", which are unique aberrations that achieved an extremely high level of power, but are considered of low priority due to different circumstances, like living on secluded areas or not being violent entities. These are often left alone unless an exorcist decides to deliberately hunt them down, as in the case of Kanaka Kagami.

The aberration responsible for Suou Sumeragi's death. Kukuri reported to Kanaka Kagami about the aberration, telling her that Tsuzura Temple had already sent a team after it and warning her not to pursue it. Kanaka ignored her warnings and searched for the creature in hopes for a powerful opponent. Upon finding it, she killed it instantly and was left disappointed.[1] Suou's sister Sunao Sumeragi sought vengence for her brother's death, taking up his Tsugumomo Kotetsu and chasing after it, only arriving the moment Kanaka killed it.[2] When undergoing a ritual to reawaken Kotetsu within the Navel God's Cave, it was among the various aberrations re-created. There it attempted to consume Kotetsu. Kotetsu is saved and together with Sunao they achieve Ascension, allowing them to easily destroy the aberration.[3]

The aberration resembles a large quadrupedal beast. It has a human like face with tusks protruding from the upper set of teeth and pointy ears. It has a head of long curly hair but is otherwise hairless.

A Kazenbou (,, Kazenbō) responsible for the death of Kanaka Kaitani's family, leaving her the only survivor. It was a candle tsukumogami which devoured its owner becoming a Person Eater.[4] The Kazenbou found Kanaka walking alone at night, sensing an emptiness inside of her and asking for her body to use as a vessel. Kanaka thought about how her family would suffer if she were to die and though she did not particularly care she still refused. Having seen through her intentions, the Kazenbou parted ways, plotting to kill her family first so Kanaka had no reason to live. When the Kazenbou attacked Kanaka and her family, Kanaka effortlessly evaded its attacks, allowing her to survive. An Exorcist named Hioki witnessed the event and reported it to Ouna Oriobana who became interested in Kanaka and took her in to Tsuzura Temple[5] The Kazenbou followed Kanaka to Tsuzura Temple waiting outside until one day Kanaka along with her classmates and teacher ventured outside for the students' exam. It followed them to the exam area, becoming trapped inside the barrier and began consuming Minor Monsters meant for the exam, causing it to grow stronger.[4] When night fell, it encountered Kanaka and the others and attacked them.[6] The Kazenbou easily overpowered the other students and teachers only to be stopped by Kanaka. Proclaiming it no longer needs her body, the Kazenbou battles Kanaka and is killed. Being the first truly life-threatening battle Kanaka fought, it was the first time she smiled and learned to express emotions.[4]

The Kazenbou resembles a flaming giant, thin, elderly, bald man engulfed in flames with a manji symbol on his forehead. It wears robes giving it the appearance of a buddhist monk.

The Kazenbou relies mainly on its physical traits for combat. Being giant and possessing great power after consuming Minor Monsters, it was capable of defeating several well trained exorcists. It is to transform into a flame or smoke like substance to disappear and reappear at will.

Flame Manipulation: Being originally a candle tsukumogami, the Kazenbou has an affinity for fire. As it is perpetually engulfed in flames, its attacks have the additional attribute of lighting its target and environment ablaze as well. It is shown being capable of manipulating flames directly when it create a rings of fire to trap his opponents.[4]

Toothyworm (でばみみず, Debamimizu) is frozen stock #1225. It is a pair of possessed earthworms that have grown to enormous size. It lives underground, occasionally surfacing to attack people or animals. Kazuya Kagami and his party of Tsugumomo are assigned to eliminate it. Upon killing the first one, Kazuya and Sosogu are caught off-guard by the existence of a second one, allowing themselves to be consumed.[7] While Kazuya and Sosogu battle the smaller digestive worms inside it, Kiriha and the others chase after it. They burrow into the ground and though the worm's head, killing it and rescuing Kazuya and Sosogu.[8]

Toothyworm resembles a giant worm with a ring of eyes around its head. Its mouth has a ring of giant spiky teeth. The digestive worms inside it are large worms with many pitch black eyes and human-like mouths with giant teeth.

Burrowing: Toothyworm uses burrowing as its main method of travel. It is capable of burrowing, resurfacing and travelling underground quickly.

Acid Puke: Toothyworm can spray a large amount of acid from its mouth to attack targets.

Digestive Worms: Within Toothyworm are swarms of smaller worms that help it digest food. These worms emerge from the surface area of its insides and attack any survivors trapped within Toothyworm. They can fly at high speeds and possess hard exteriors. Their main method of attack is biting with their large jaws.[7] 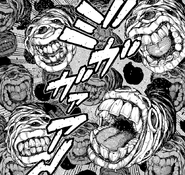 A beast made of wood

A monster with drawing-compass legs