Episode 1
“
If tsugumomo are humans, you could say amasogi are closer to beasts.
”
—Kiriha, Chapter 36

Amasogi (あまそぎ, Amasogi) are a type of Tsukumogami. Amasogi are certain objects that have a strong wish attached to them from a Host and, through various means, have been imbued with large quantities of Curse. When they have been sufficiently filled with curse they become supernatural entities that seek only to fulfill the wish of their user, as it is the purpose of their existence. They lack sapience and do not have thoughts or opinions of their own and will stop at nothing to fulfill the wishes of their owner. They also lack human-like bodies and, while there're certain cases of sentient Amasogi, they lack any notable level of intelligence and will only act based on their instincts. There is a bond between the user and the Amasogi, so if the Amasogi is destroyed by anyone other than them, it could create a situation called Curse Backlash to the original host.

Though not inherently evil, they are generally chaotic due to the typically-negative consequences they bring upon granting the impulsive desires of their hosts, even more so if the Amasogi is powerful enough to influence the surroundings and affect other people. In such cases, Amasogi cause Aberrations and are tasked by an Exorcist to be destroyed due to their negative influence on their surroundings. Exorcising an Amasogi is a process that can be done through four different methods:

While Amasogi are born from strong desires of their creators, their birth is directly related and limited to places where there's a high concentration of Curse, which fluctuates and varies very often from time to time and making the appearance of Amasogi something sporadic and infrequent. However, certain areas are more likely to produce Aberrations due to a stronger concentration of Curse caused by different reasons. Taboo Children are a common and infamous kind, as they are humans that inherently attract Curse to them, making the places where they live more likely to be chaotic due to Aberrations. 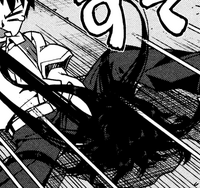 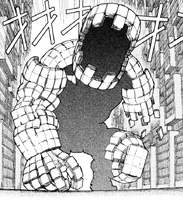 Ability/Effect: Locks victims in the library. Attempts to break out creates a book-filled space. Utilizes book based attacks such as launching books and a book based construct at those who interfere with Chisato's desire. 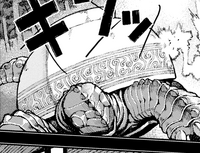 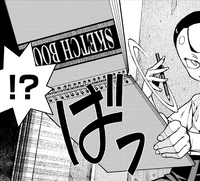 Ability/Effect: Drawing materialization. Creations created by the sketchbook retain weaknesses as if they were regular paper drawings. Can be used by people other than the host.

Ability/Effect: Has interactions with females within the area be done through a dating-sim style dialogue system. Successful interactions result in the female target developing romantic feelings. Successfully winning over a girl results in them engaging in sexual activity with the winner.

Ability/Effect: Mimics the host's voice and speaks her true feelings which she is to shy to convey. Attempts to convince the host to act on their darkest feelings. 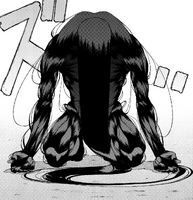 An amasogi manifested from a lock of Eiko Nago's hair, recreating her growth along with it. In order to fully manifest the growth had to have Nanako' desire align with its own.
Ability/Effect: Powerful hair based attacks. 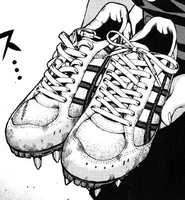 Creator/Host: Mana Manaka
Desire: Keep ahead of Mitsuri
Item: A pair of cleats

Ability/Effect: Hinders growth and development of victim. Grants host superhuman leg strength. Spikes at the bottom allow the host to cling to surfaces.

Ability/Effect: Entry and trapping of targets into Isuzu's Dream World. While in the dream, targets in the real world are stuck in a sleeping state.

Ability/Effect: Transports targets and host into an arena world governed by fighting game mechanics, such as certain abilities can only be used by building meter, player life bars and moves requiring specific input. The host is given superhuman abilities. 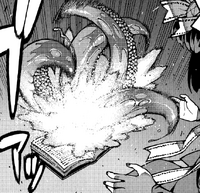 Ability/Effect: Manifestation of creatures found in Fuu's self written novel.

Status: Destroyed by Kiriha
Backlash: Amnesia of the events related to the Amasogi.

Ability/Effect: Traps targets in pairs, within a confined space, forcing them to answer quiz questions about their partner in order to escape. The host is able to travel freely with the created space, appearing and disappearing at will. 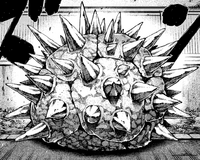 Ability/Effect: An impenetrable spiked shell that can only be opened by the host from the inside. 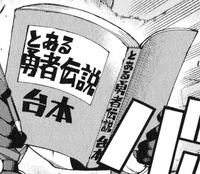 Legend of a Certain Hero Script

Creator/Host: Konoka Kobayashi
Desire: To be the hero of the play
Item: Play Script

Ability/Effect: Transforms the area into a fantasy setting with inhabitants transformed into fantasy characters based on them. The host can change the script, altering her own role to gain different abilities and forms.

Status: Destroyed by Kazuya & Kiriha
Backlash: Hair stuck in the style of the hero's. 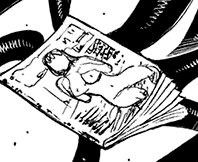 Ability/Effect: Traps the owner's consciousness within the world of the book. 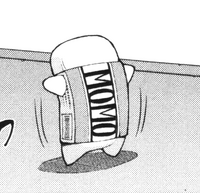 Ability/Effect: A small eraser with short stubby limbs that waved and bounced around.

The MOMO label is likely in reference to Mono brand of stationery. 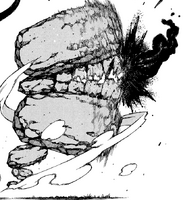 The first amasogi made by Kazuya.
Ability/Effect: Rocks form a mouth powerful enough to destroy an aberration.

Desire: Defeat each other
Items: Eraser and Pencil

Two separate amasogi created to fight each other. 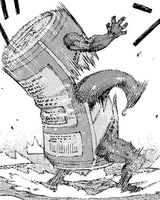 An amasogi created to test Azami in combat and was destroyed before it could act. 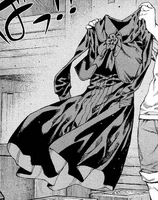 An amasogi created to train Azami in combat. Due to a mistake on Kazuya's part, it ended up possessing her.
Ability/Effect: Unknown 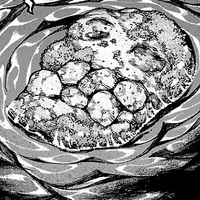 Status: Destroyed by Kiriha while bound to Kazuya