Yūko Ōno
Azami (あざみ, Azami) is a black obi tsugumomo created by Kazuya Kagami. She's a special case among Tsugumomo in that she's divided between two "halves", both of which act as separated entities but represent the same Tsugumomo "Azami". After a certain incident, both halves were separated, with one living inside of Kamioka while the other was kept out unable to enter due to a barrier placed by Kukuri.

In their human form, both Azamis have almost the same appearance of a very young girl with a long straight purple hair. They have a rounded face and constantly sport a menacing expression, with shadows below each of their eyes. They're surrounded by a dark and intimidating aura, furtherly increasing their intimidating looks. Unlike Kiriha, Azami's appearance has never suffered any change regardless of her circumstances. The only major difference between both Azamis is in their attire. The Azami that is outside of Kamioka wears a black kimono with an obi, and is always seen carrying a spherical shaped object that is covered under her layers of obi. The Azami that lives inside Kamioka wears a standard school uniform.

Both Azamis share the same personality and thought process, allowing them to remain communicated even while separated by large distances. A very silent and gloomy girl covered by a sinister aura around her, Azami is not very sociable and strikes deep fear into the hearts associates. While she assisted Mayoiga, she cared little about their cause and only did so due to personal convenience. She has no tolerance for those that betray her expectations, and was not above attempting to kill her allied Tsugumomos if they failed to keep their promises. She's not very expressive, and keeps her distance with the members of Mayoiga, usually only talking to them to provide needed advice or give them instructions and reserving her words only for when it's absolutely necessary. The only one from Mayoiga she seems to have a bit of a soft spot for is Mimane, who even managed to convince her to wash her during a bath together.

Despite her disturbing exterior, Azami has a strong crush for Kazuya Kagami, which carried over since the time of her creation. Her half in Kamioka regularly observes him from afar and watches over him, even going as far as secretly attacking those that harass him. She makes an effort to remain in the shadows and avoiding direct contact with him though. While her current status makes her an enemy of his, she still shows signs of deeply caring for him, boiling with rage at the slightest sign that her allies from Mayoiga could harm him and threatening with killing them if they do.

When Kazuya was little and training under the tutelage of his mother, he felt like he would never be able to surpass her and began experimenting using his unusual talent for creating Amasogi due to his status as a Taboo Child. However, as Amasogi are unstable and dangerous, he felt that he needed to take it even further an create a Tsugumomo, spending several months pouring mysterious power and curse on a Black Obi. This finally resulted in the birth of the Tsugumomo Azami. After this, Kazuya began secretly training by creating Amasogis from the wish of "Killing Kazuya" and fighting against them with Azami, hoping that they could potentially get stronger than Kanaka and Kiriha. At Azami's request, the two began spending more time together in order to deepen their bonds and get stronger. Kazuya managed to arrange it so that he could get his own room where Azami would sleep, as well as taking baths together.

Eventually during Kazuya's training, he picked up a school uniform that belonged to Kanaka when she was a kid and created an Amasogi from it. Despite his efforts, he was disheartened when the Amasogi didn't show signs of awakening so he merely asked Azami to dispose the uniform. However, upon coming into contact with it, the Amasogi possessed Azami and merged with her, resulting in the birth of her other half. Possessed with the Amasogi born from the wish to "Kill Kazuya", Azami attacked him on the spot and he was forced to run away and ask for help to Kiriha and his mother, who promptly defeated her and bound her with an obi cord that prevented Azami from acting. However, Azami took the chance when she lowered her guard and possessed Kanaka as well, who begins targeting Kazuya as well following the Amasogi's will. He's protected by Kiriha, who can do little more than defend to Kanaka's attacks. As Kiriha defended Kazuya from a barrage of attacks she was able to connect with Kanaka's inner self, and with Kanaka's help giving her an opening for them to deliver a fatal blow, Kiriha was able to pierce her heart and left the location after Kazuya was having a mental breakdown. As Kiriha left with Kazuya to seek for Kukuri's help, Azami hadn't remained idle and had used an obi layer to close Kakana's heart wound, saving her from her death. After she awakened, she went to Kukuri's temple where Kazuya was and engaged in combat against the God of the Land herself. After an intense battle, Kanaka and Azami were finally defeated by Kukuri, but at the last moment Azami managed to pick up the unconcious Kanaka and escape with the help of the other half as they were transported outside of Kamioka. She encapsulated her in a spherical shaped coffin with several layers of obi, protecting her from harm until she would recover.

After that Azami stayed some time alone on the outsides of Kamioka, where she's unable to enter due to the barrier placed by Kukuri. Weakened and exhausted, she was reduced to a black mass and remained immobile to recover some strength, only acting to attack any living being that got near her. She was eventually found by the members of Mayoiga who, through a prediction made by Arumi Ashimine, concluded that she would be able to help them on their mission. After engaging in a brief battle against Mayoiga's Scouting force, she was captured and taken to Mayoiga, where she remained confined for the following years in order to recover. When she was finally healthy again, she was saluted by the members of Mayoiga, who explained her their goal and asked her for help. She refused to give any information about her, but made a deal with them. In exchange of information, her assistance and instruction over how to accomplish their goal, she would be the one to supervise their operation to obtain a Stone Shard and they would also promise to avoid wounding the Exorcist Kazuya Kagami.

Azami's abilities closely resemble those of Kiriha's, being able to fight by wielding multiple layers of her obi to form a wide variety of tools, with most of her techniques being very similar to Kiriha's as well. Probably due to Kanaka being her current owner, she's considerably stronger than her counterpart, however as she's able to take full control of all 8 layers to make use of the full potential of an obi Tsugumomo. She's very powerful, as even the other Tsugumomo from Mayoiga fear her and do everything they can to avoid angering her. When they first found her a team consisting of six of Mayoiga's strongest was needed to subdue her, despite the fact that she was at the time weakened and recovering from deep wounds after her battle with Kukuri. When the two Azamis combine their forces, their strength multiplies, capable of defeating even lesser Gods like Taguri Kaneyama.

Possibly due to the fact that she was created through a combination of mysterious power and curse, Azami is inherently connected with Curse, and she attracts it depending on her emotional state. If she's angered, Curse leaks out from her body, increasing the possibility of an Amasogi's creation. 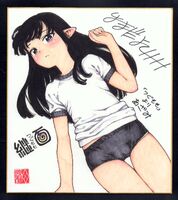 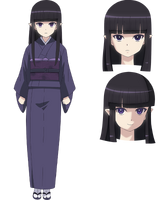