Chisato has a rather plain appearance with thick eyebrows and black hair that she ties in a braid. She normally wears glasses. However, when she unties her hair and removes her glasses, she is shown to be pretty.

She originally had bangs in her hair, but she later has her forehead exposed with the bangs now hanging at each side of her face.

When her gender swapped, Chisato face looks the same but her hair becomes short.

Chisato has a studious, prudent, and overall caring personality. However, she will resort to violence when facing extremely unpleasant situations (mostly perverted). When it comes to Kazuya, Chisato is shown to always be harsh, if not sometimes violent, towards him but only because she cares for him.

She is also shown to be simple and rather modest, such as how she created an Amasogi that was born from a simple desire to come over to Kazuya's house to study with him, and was satisfied when Kazuya invited her, dispelling her Amasogi.

Chisato has been friends with Kazuya since childhood. They would often play together. When they were playing house with dolls, some kids teased them, which made Kazuya not wanting to play anymore. Despite that, Chisato decide to hold on one doll while Kazuya holds the other one. They have since been together where Chisato would often lecture and help Kazuya at school.

Chisato possess no special abilities beyond a normal human's capabilities, but she is shown to be skilled at wielding a harisen fan.

When given a special charm by Kukuri in the Dream World, Chisato is able summon and command her Amasogi.

Key art of Chisato for the anime 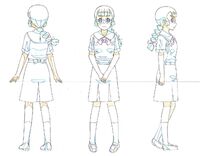 Chisato in the opening 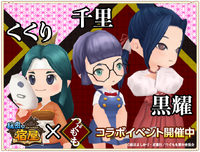 Kokuyou, Chisato and Kukuri in Himitsu no Yadoya

Chisato in Himitsu no Yadoya in-game 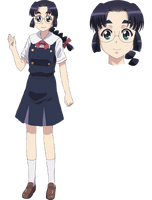 Chisato in the Mini Anime