April 28, 2017
I4U is a song by MICHI which serves as the ending theme to the first season of the Tsugumomo anime.

Presented in a painterly style is a thin square box tied closed with a red string. From inside the box, Kazuya is shown opening the box from the outside. A scene of a sakura tree is shown as clouds pass by and the seasons change from spring. Two still shots of Kiriha putting on her kimono are shown, panning upward but stopping short of her head. A still panning shot of Kazuya eating a popsicle out on the engawa, accompanied by his mother and Kiriha whos faces are out of shot. A still shot of a young Kazuya clinging to Kiriha's robe as she pats his head is shown. Kiriha is shown from behind as her hair and clothes wave in the night and the stars pass by. A still panning image of Kazuya as a child with Kukuri and Kanaka entering the Hakusan Shrine is shown followed by another still shot of Kazuya in the present, leaving the Hakusan shrine accompanied by Kukuri in her weakened form, Kokuyou, and Chisato. A shot of Kazuya's shoes resting at his front door is shown, slowly panning out as more pairs of shoes fade in around his. A still panning image portray Shirou, Osamu, Chisato, Kazuya and Kiriha walking together in the streets. A shot of Kazuya's torso with Kiriha hugging him from behind is shown before changing to a shot of their heads and zooming in on their faces. The final shot depicts an empty white space with Kiriha hugging Kazuya from behind. 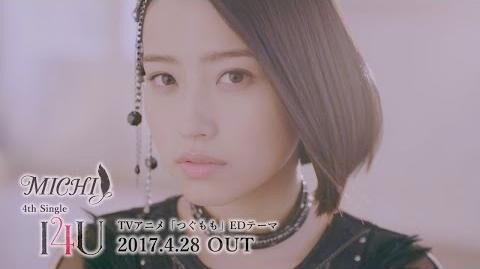 Retrieved from "https://tsugumomo.fandom.com/wiki/I4U?oldid=11839"
Community content is available under CC-BY-SA unless otherwise noted.