Isuzu is a young woman with light skin and light-brown shoulder-length hair. She is of average height and has large breasts. She wears a hairband with a flower on each end. Her clothes consists of a sweater, a black shirt underneath, a black full-length skirt and black shoes. She wears a necklace consisting of several round jewels. After the incident with her amasogi, Isuzu will at times tie her hair up.

Her younger form is shorter with a smaller chest. In this form she has similarly lengthed hair but tied at the side with flower decorations and parted down the middle. 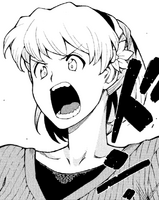 Isuzu with her hair up

Young Isuzu disguised as a student

Isuzu introduces Kiriha to the class upon her enrolment to Kamioka East Middle School and is happy to see the class's excitement. She tells Kiriha that dying her hair is against the school rules but Kiriha tells her it is her natural hair color. She assigns Kiriha to sit next to Kazuya Kagami where Kiriha is immediately bombarded with questions from her classmates upon sitting down. Upon hearing that Kiriha lives intimately with Kazuya, Shirou Shiramine takes over the class to hold a trial against Kazuya. Isuzu tries to stop them but is ignored. Isuzu appears flustered when Kiriha defends Kazuya, stating all the accusations of him sleeping and bathing together is what she wanted.[2]

Shortly after the destruction of Mana Manaka's amasogi, Mimane Miyou gives Isuzu an amasogi pillow which results in a large number of students falling into a deep unending sleep.[3]

As more students fall victim to Isuzu's amasogi, Kazuya and his Personal Advice Club eventually deduce Isuzu to be the culprit and confront her. Mimane tells Isuzu to retreat into the dream world, leaving her unconscious in the real world. The club bring Isuzu's body to her home where they prepare to enter her dream.[4] Isuzu speaks to Mimane within her dream world, expressing desire to stop what they are doing. Mimane finds that boring and manifests Isuzu's Shadow to replace her and take over the dream world. Isuzu somehow escapes and hides amongst the students as a younger version of herself.[5]

After Kazuya and his allies enter her dream, Isuzu meets up with Chisato, Osamu and Shirou while Kazuya and Kiriha fight their shadows. She asks they help her kill the imposter but they ignore her believing her to be suspicious. Isuzu explains the imposter to be a shadow and the amasogi to be hidden within her body. Chisato asks about the location of the original Isuzu but Isuzu is hesitant to answer. Osamu catches on and decides they should trust her. Just as they finally agree to cooperate they are interrupted by Shadow Isuzu. Shadow Isuzu monologues about her desire to improve her lack of confidence caused by her students and peers' treatment of her, using the power of the amasogi and shadows. She summons shadow versions of the three students and tells them to accept their shadow selves. When they refuse, the shadows attack while Isuzu hides around the corner. Before Kazuya and his allies can be fully consumed by their shadows, Isuzu reveals herself, causing them to temporarily disperse. Shadow Isuzu summons more shadow students to attack but Isuzu uses a pair of chalkboard erasers to create a cloud of chalk, enabling their escape. Isuzu thanks the students for teaching her the courage to fight back and do the right thing before splitting up.[5]

Isuzu confronts her shadow self one-on-one, using her previous trick to create another dust cloud and ambush her shadow using her more agile younger form. By writing words onto paper, Isuzu is able to manifest supernatural abilities to fight against her shadow self. After damaging her shadow a bit, Shaodw Isuzu uses her real students as a shield of hostages and commands them to pin Isuzu down.[5] Her shadow tears up the paper that Isuzu was using to empower herself and prepares to swallow her. Isuzu is saved by Chisato, Shirou and Osamu who manifest their own amasogi to defeat their shadows, restrain the students and capture Shadow Isuzu. Shadow Isuzu breaks free by transforming into a giant spider causing Isuzu to faint. Kazuya buys enough time for Osamu and Chisato to wake Isuzu up, weakening the shadow enough to expose the amasogi within. Isuzu delivers the final blow to the shadow and destroys her amasogi. After the battle, Kiriha teases Kazuya after from having his clothes torn off during battle, to which Isuzu tells them not to have impure relationships. Bakura contacts them, telling them to go to sleep in order to awaken from the dream. Before awakening from the dream, Isuzu laments having to give up her youthful dream form and returning to reality[6]

Within the real world, Kazuya and Kiriha are the last to awake. When they explain why it took so long, Isuzu expresses concern as a teacher. After the incident, Isuzu learned to be more assertive with her student in the real world and has stopped repressing her shadow self completely.[6]

Isuzu explains to Kazuya and his Personal Advice Club that her amasogi was given to her by someone but she cannot recall who. Mana, Nanako Nanakai and Shirou attest to the same thing happening to them as well and they come to the conclusion someone is purposely causing the incidents.[7]

Dream Pillow (夢枕, Yumemakura): A dream pillow amasogi given to Isuzu by Mimane Miyou. Isuzu used the pillow to grant her desire of actualizing her ideal self. By dragging students into her dream, Isuzu was able to act confidently around them unlike in reality. Once Isuzu expressed doubts about using the pillow, Mimane had Isuzu's Shadow take over her dream world. Though not in control of the dream anymore, Isuzu still possessed abilities within the dream world.[6]

Within her dream, Isuzu had access to numerous supernatural abilities even after her shadow took control over the dream.