Kasumi Kagami (加賀見霞, Kagami Kasumi) is the elder sister of Kazuya Kagami, as well as the daughter of Kanaka Kagami and Kazuaki Kagami. With their mother gone and their father working all day, Kasumi has taken responsibility for most of the household work while watching over her brother.

Kasumi is a young woman with a long straight black hair. Beyond their different hair, she closely resembles her mother on her younger days, both in facial traits and in physique. Her attire is typically casual and simple.

Kasumi's only two years older than her brother, but she is mature and very independent, taking care of most of the house's affairs on her own, and comes off as a very reliable person despite her age. She is notorious for her "brother complex", and is suggested on more than ocassion that she has a romantic obsession for her younger brother Kazuya. She's constantly attending to any necessities he may have on the daily life, like cooking for him or waking him up on the mornings for school, coming off as closer to a mother than a sister. She's constantly watching over him and making sure that he doesn't go through any misfortunes, but she's also extremely obsessed with him and doesn't want to be separated from him. She's also shamelessly open about her incestuous obsession, often trying to get more intimate with him or pushing him to bath together, and she's been described by Kiriha as a "brother-holic". She's been like this since they were little, and she used to sleep and bath with him until he got old enough to refuse his sister's company, which greatly distressed Kasumi as she felt that he was entering in a "rebellious phase". She's quite a pervert, as even from a young age, she was "teaching" an innocent Kazuya about matters related to sexuality that were inappropriate for a boy of his age.

She does not get along well with Kiriha, as she dislikes her self-centered nature and often tries to make her do some housework. Fortunately for her, she's much better than her relatives at dealing with the Tsugumomo, and is the only one on the house that can keep her under control. She's diligent and works hard to cultivate an image as a dependable figure, so she does not mind the work it takes. She's very protective as well, quickly rushing to her brother's room whenever she hears a suspicious noise, especially if she believes Kazuya could be in danger. She was originally against the idea of accepting Kukuri and Kokuyou on their house, but she ended up being way more fond of Kukuri than she is of Kiriha.

Kasumi was born from the union between Kanaka Kagami and Kazuaki Kagami, two years prior to the birth of her brother. When she was 6 years old Kanaka was planning on making one of them her successor and Kasumi, who had never shown any enthusiasm in becoming an Exorcist, willingly accepted the role in order to protect Kazuya from her mother's rigorous training and the dangerous life of an Exorcist. While she was very talented, Kanaka was not quite satisfied with her performance, as she was looking for someone that would be able to match or perhaps even surpass her. However, Kazuya eventually showed a potential comparable to Kanaka's, leading to him being recruited for the training as well and making Kasumi's efforts worthless. In a period of only three years, Kasumi was no match for her brother and failed to keep up with their training.

Following the events where Kazuya's memories were sealed after their mother was possessed by an Amasogi, Kukuri told her and Kazuaki everything about the incident. The family moved to a new house to prevent any memories from their old house from resurfacing. Filled with a desire to protect her brother, she secretly continued training without telling Kazuya. She was quickly recognized for her great ability and was gifted with the Hourglass Tsukumogami Saori, who became her partner when she was appointed as an Exorcist.[1]

Kasumi welcomes Kazuya home after he returns from school the day of Kiriha's reawakening, inviting him to join her in the bath but is rejected. The next morning Kazuya screams, prompting Kasumi to rush into his room, but Kazuya tells her it was nothing.[2] Later that day, Kasumi confronts Kazuya about the recent noises coming from his room, eventually storming into his room but finding nothing there. As Kazuya goes to take a bath, Kasumi offers to join him but is rejected.[3] Some time that day, Kiriha reintroduces herself to Kasumi and their father, unbeknownst to Kazuya.[4]

Kasumi welcomes Chisato when she comes over to study with Kazuya, seeing her for the first time in a long time and not immediately recognizing her.[5] The next day as Kazuya leaves for school, their father tells Kazuya he will be home early to eat dinner together to which Kasumi tells him to stop yelling so early in the morning.[6]

Some time later, as the family is eating dinner together, Kasumi grows suspicious of the extra food Kazuya is bringing upstairs, warning him of keeping pets since their dad is allergic. Kiriha remarks that Kazuya himself to be a dog already, causing Kasumi and her to argue while Kazuya is shocked that Kiriha is already acquainted with his family. Later that night, Kasumi reiterates to Kazuya they are not allowed to have pets when Kazuya invites some strays to their home, but is shocked when Kazuya reveals they are people.[4] Kazuya and Kiriha discuss with Kazuaki and Kasumi about allowing Kukuri and Kokuyou to stay at their home. While initially refusing, Kiriha convinces Kazuaki into allowing it, to Kasumi's surprise. Kasumi greets her brother the next morning.[7]

One day in the household, as Kiriha is lazing about watching television, Kasumi turns it off, chastising her, pointing out Kukuri who is doing housework to earn her keep and has Kiriha shave potatoes. Kasumi sends Kazuya to get some groceries with Kiriha and Kukuri joining him as they have finished their work.[8]

Some time later, after Kazuya was challenged by Sunao Sumeragi, Kasumi and Kukuri walk into Kazuya and Kiriha naked together in bed, causing both of them to freak out.[9] After Kazuya's duel, Kasumi is surprised to find Kazuya immobile and requiring Kukuri's help to feed him.[10]

Some time later, Kasumi bursts into Kazuya's room to prevent Kiriha from getting too intimate with Kazuya. Kasumi states she allowed the two to remain together to increase Kiriha's power, but warns her of crossing the line. Kiriha suggest the possibility they already have, prompting Kasumi to "inspect" Kiriha against her will.[11] The night after dealing with Mana Manaka's amasogi, Kiriha brings Kazuya home, paralyzed again from using Ascension. Kasumi and Kokuyou help Kazuya bathe and tend to his needs while he is immobile.[12]

When Kazuya and Kiriha have returned home after dealing with Wakana Wakisaka's amasogi, Kasumi, Kukuri and Kokuyou find Kiriha being unsusally affectionate to Kazuya. Later without Kazuya, Kiriha tells them that Wakana's amasogi had revealed the woman Kazuya likes the most is not Kiriha. All three of them get flustered thinking that it may possibly be them instead. The four confront Kazuya about this, but he refuses to reveal his answer. They Bakura put him to sleep and enter his dream to ascertain to he likes the most, revealing it to be a genderbent version of himself, a development which Kasumi seems fond of.[13]

One night, Taguri Kanayama arrives at their home with and injured Kokuyou and they explain she was attacked by assassins seeking to kill Kukuri. The group make plans to confront the assassins, with Kasumi tending to Kokuyou at Hakusan Shrine where Kukuri awaits her assailants.[14][15] Kukuri puts a barrier around Kasumi and Kokuyou as she fights her opponents. After the assassins are defeated, they return home, with Kasumi looking after Kazuya and Kokuyou.[16] Kasumi watches awkwardly as Taguri gets Kukuri drunk on sake after their victory.[17]

After Kiriha is destroyed by Kanaka, Kasumi arrives to save Kazuya from their mother.[18] Kasumi tells Kazuya they will buy him three years to get stronger to fight Kanaka, and she and Saori activate their time stopping barrier to seal Kanaka and themselves away.[19] She also seals away Kukuri's body, allowing for the possibility of Kukuri's revival later.

Expert Combatant: Befitting Kanaka's daughter, Kasumi was called a prodigy child since a young age and was described as being a talent seen only once per generation. She was personally trained by her mother for some years, resulting in her developing a considerable amount of fighting ability. She's quite skilled at martial arts and is physically strong, capable of fighting amasogi even bare-handed. Despite her impressive potential, she was never quite on the same level as her brother and mother, and would quickly fall behind to Kazuya's much faster progress. Even so, Kasumi is still able to land a hit on Kanaka, even knocking her back a bit.

After becoming the owner of the Hourglass Tsugumomo Saori, she began training to use her to its full potential and earned access to her powerful and unique abilities.

Keyart of Kasumi for the anime 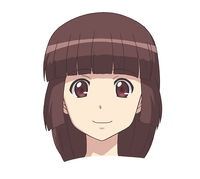 Kasumi in the opening

Kasumi in the Mini Anime