Kokuyou is a tall, slender woman with a curvaceous figure.[1]

Kokuyou has poor identification skills, mistaking Shirou Shiramine for Kazuya Kagami despite possessing a perfect drawing of Kaguya's appearance.[1] Her poor memory retention for people's appearances led to her completely forgetting Shirou when she next saw him.[2]

She is an unapologetic glutton, spending a long amount of time easily consuming an entire feast singlehandedly when the opportunity presented itself despite being on an urgent mission.[3]

Kokuyou appears on the outskirts of Kamioka at night, commenting that the curse has deepened and questioning how it should be addressed. A voice answers back to her that they need only to wait and see for the time being.[4]

She is ordered by Kukuri to bring in Kazuya Kagami since the siutation is worsening as evidenced by the amasogi awakening at Kamioka East Middle School.[5]

Five hours later, Kokuyou ran into Shirou Shiramine in the streets, mistaking him for his friend Kazuya.[1] Shirou offers to lead Kokyuou to Kazuya in exchange for a meal at a restaurant together. Kokoyou tries to leave to resume her search but Shirou tempts her to stay with the menu and she orders a massive quantity of food.[6]

After devouring an entire feast singlehandedly Kokoyou is congratulated by a crowd of onlooking staff and customers, and is given a cake to take away with her a reward. She bids them farewell as Shirou is apprehended by the staff and forced to work to make up for all the food that Kokoyou ate which he cannot pay for.[3]

Returning to her shrine, Kokuyou apologizes to an irate Kukuri for abandoning her assignment and makes an offering of the cake she recieved which Kukuri enthusiastically eats. Kukuri orders her to go once and more and bring Kazuya back, stating that he is probably at school and that Kokuyou should avoid causing any trouble.[7]

Flight: As a transformed crow, Kokuyou can manifest a large pair of black-feathered wings and fly through the air, even while carrying another person.[8]

Character art of Kokuyou for the anime 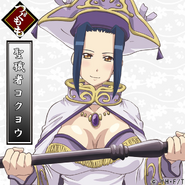 Kokuyou and Kukuri in the opening 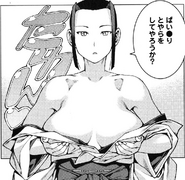 Kokuyou, Chisato and Kukuri in Himitsu no Yadoya

Kokuyou in Himitsu no Yadoya in-game

Kokuyou's season 2 character art
Add a photo to this gallery

Retrieved from "https://tsugumomo.fandom.com/wiki/Kokuyou?oldid=8928"
Community content is available under CC-BY-SA unless otherwise noted.