View source
watch 01:36
We're Getting Mutants in the MCU - The Loop
Do you like this video?
Play Sound

Konoka is a young girl with light skin and short dark hair. She has a slim body and large eyes. 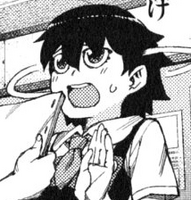 Konoka is very passionate about her art, growing increasingly frustrated when her classmates continually altered creative vision against her will. Kiriha recognizes her script as being ripped off of the role-playing game Dragon Flare, suggesting she is a fan of the game. Konoka is very self-centred, having written her script with the idea of placing herself in the role of the hero and refusing to destroy her amasogi even after being defeated.

As part of the drama club, Konoka was forced by her classmates to write a play for their school. After writing the script, Konoka was removed from the main role, her script rewritten and herself given the new role of a unimportant townsperson.

At some point she was given a curse filled script which became her amasogi, likely from Mimane Miyou.

One day Kazuya Kagami and his friends discover their school to be covered in plant life and roaming with monsters. As Konoka enjoys her time defeating monsters Kazuya and his friends confront Konoka in an attempt to convince her to destroy the amasogi herself. Konoka refuses but is defeated by Kazuya and Kiriha. In defeat, Konoka refuses to destroy her amasogi, resulting in Kazuya and Kiriha destroying it for her. Konoka's hair becomes stuck in the style of the hero's as a result of the Curse Backlash.

Legend of a Certain Hero (とある勇者伝説, Toaru Yūsha Densetsu): A fantasy play written by Konoka. After her classmates forced her to write the play only to make casting and story changes despite her protests, it became an amasogi to fulfill Konoka's desire to be the hero and get revenge by forcing her classmates into undesired roles just as she was. It is implied the amasogi was given to her by someone from Akito Ashimine's group. Kiriha recognizes the script as being a ripoff of the role-playing game, Dragon Flare, including identical weaknesses for the dragon. Once destroyed, the resulting Curse Backlash caused Konoka's hair to be stuck in the style of the hero's. 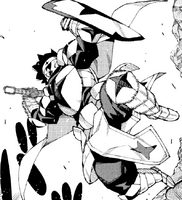 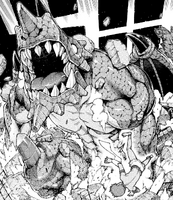