Shiroi is a boy with shoulder length hair and sharp eyes.[1]

He is usually seen in his high school uniform.[1]

When gender-swapped, his eyes become rounder and has a curvy figure with big breasts. His female appearance also wears a headband along with female school uniform.

Although Shirou can be friendly, he is extremely perverted at his core. He often tries to flirt girls with large chests. Because of his pervertedness, he shows no shame and doesn’t tend to hold back on his desires.[2] This perverted side makes him also extremely vengeful, particularly towards Kazuya Kagami for always being surrounded by girls.

Despite these shortcomings, he still possesses some level of moral such as how he was willingly, although with hesitance, to destroy his own amosogi and help Kazuya in his role as a exorcist.

Keyart of Shirou for the anime 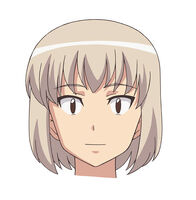 Shirou and Osamu in the opening