View source
watch 01:40
The Sandman Will Keep You Awake - The Loop
Do you like this video?
Play Sound

Sosogu has short blue-green hair resembling a bob cut which covers her eyes. She wears a hat resembling a chipped sakazuki with her symbol on it and a rope tied around the top. Beneath her hat, parts of her hair are darkened forming the pattern of a ring with a circle in the middle. She wears a large cape with a symbol on the back, tied together with a rope and resembling tokkuri when worn. Underneath, she wears clothes resembling a baggy cloth jumpsuit with vertical rib stitching. 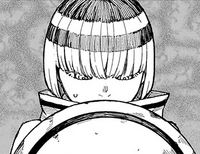 Sosogu's hair pattern underneath her hat 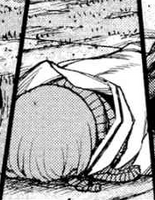 Sosogu's initial appearance without her hat 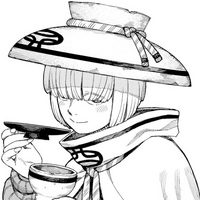 Sosogu was owned by a farmer who lamented Sosogu's lack of use, wishing he had a tsukumogami which he could profit off of. The only use he found for Sosogu was for getting drunk, but even doing that much used up much energy. One day, the man found a farming hoe tsukumogami, and with only enough spiritual power to own one, he abandoned Sosogu.[1] At some point in time, Sosogu found her way to Mayoiga and joined them.

Sosogu was present for Tanmen's meeting, welcoming Akito and Arumi to Mayoiga, and when Arumi used her divination to search for the next god take a Stone Shard from.[2][3] She was present for when Azami revealed herself after years of being captured.[4]

Sosogu is among those usually seen at Tanmen's meetings. When asked about which woman he loved the most, she was among those Akito Ashimine considered.[5] She is present at Tanmen's meeting when Akito and Yasuki return to Mayoiga, and Miurahi's reawakening.[6][7] Sosogu is with the group which participates in the battle against Kanaka Kagami after Miurahi was killed, and is easily defeated by Kanaka along with the rest of Mayoiga.[5]

Sosogu is amongst the tsugumomo recovered by Kazuya Kagami and his group from Masuji Madarai's faction.[8] Following the Nine Masters Tournament, she is one of the five tsukumogami to remain under Kazuya's ownership along with Kiriha, Kyouka, Mimane Miyou and Shinobu.[9]

Sosougo accompanies Kazuya and his crew to deal with the amasogi of Mami Mamisaka, travelling into the book world of Continent of Magic: Chronicles of Ziral. Sosogu stays with Shinobu, Kyouka and Mimane, remaining in Mimane's mirror world, becoming unknowingly separated from Kazuya and Kiriha after they are enslaved.[10] Sosogu, Shinobu and Kyouka are forcibly ejected from the mirror world when Mimane is being stolen from Teenya's possession. Shinobu quickly incapacitates Teenya's assailants and Tilt thanks them for rescuing her sister. When confronting Tilt about how she acquired Mimane, Tilt lies, telling them she found the mirror in the trash. Sosogu uses her abilities to erase the kidnappers' memories. Tilt later tricks them into slavery under Dabada Dabaharl, by telling them that she is the best person to ask for information.[11] After the four are finished being tortured, they learn from Malmalika that Kazuya and Kiriha were also enslaved by Dabada. The group find themselves unable to escape the book due to the slave collars placed on them, even when Sosogu erases Kyouka's memories to remove rebellious intent. The next morning, Dabada arrives to have the four work as dancers in revealing outfits.[12]

Upon returning to Dabada's slave market, they find Tilt being assaulted by the other slaves. Shinobu stops them and Tilt informs them of Dabada's plan to use Teenya and the other slaves as sacrifices to expand her Demon Mushroom Garden. Tilt begs them to help to which Shinobu accepts. Sosogu heals Tilt's injuries and Shinobu formulate a plan for Tilt to kill Dabada.[13] Dabada has Sosogu and the remaining slaves gather at the front Gate of Yohne Castle while Tilt watches for the time to strike. The four along with the rest of the slaves are immobilized by the Demon Mushroom attached to Teenya's body and have their energy slowly absorbed. Tilt uses clone bodies the four had provided her to land a near fatal blow on Dabada but she survives.[14] Tilt drinks the second bottle of Eight Speed Liquor Sosogu had provided her and attacks again, successfully killing Dabada. The four are freed from their slave contracts and Sosogu heals Tilt from the side effects of drinking too much Eight Speed Liquor. Dabada revives, undergoing demonic transformation and ensnares the group again but they are quickly rescued by Kazuya.[15] While Kiriha holds Dabada off, Kazuya takes Sosogu, Shinobu, Kyouka and Mimane to destroy the Demon Garden Mushroom and rescue the remaining slaves. Kazuya uses Simple Spiritual Intercourse to restore the four's spirit energy, and uses Sosogu's Eight Speed Liquor to quickly reach the other slaves.[16] After rescuing Teenya, Kazuya and Kiriha face off with Dabada and defeat her.

After Dabada's death, Kazuya and Kiriha spend their time locating demon spies and Demon Mushroom seeds until Teenya is eventually cured of her illness. With Teenya cured, the group leave the book world, having fulfilled the amasogi's desire. Later on, Kazuya, Kiriha and Ouna are given spankings as punishment for their behavior on the mission. Shinobu has Sosogu punish Ouna for not supervising Kazuya properly.[17]

Kazuya brings Sosogu along with his other partner's with him to eliminate frozen stock #1225 "Toothyworm". After successfully killing it, Kiriha, Mimane, Koyouka and Sosogu begin to brag about their contributions to the fight. Sosogu begins to express doubts about her own usefullness. Kazuya and Kyouka attempt to cheer Sosogu up but a second Toothyworm erupts from the ground, swallowing Kazuya and Sosogu.

The two find themselves trapped within the worm underground. Sosogu continues lamenting her uselessness, stating that any of Kazuya's other partners would be more helpful in helping to escape the situation. Kazuya denies Sosogu's claims telling her she is useful. They are suddenly attacked smaller digestive worms. Kazuya uses Sosogu's speed enhancing liquor to evade them but finds they are too hard to punch bare fisted. Kazuya drinks another dosage to increase his speed, giving him the momentum to successfully destroy them. Kazuya drinks a third dosage but finds himself slowed instead and ends up getting hit. Sosogu quickly heals Kazuya and apologizes for messing up the drink.[1] Kazuya continues running as Sosogu continues to apologize for being useless. Kazuya tells Sosogu she is not useless, using the botched liquor to slow the worms down instead. Kazuya uses Sosogu's strength enhancing liquor to finish them off, using an enhanced punch to create a shockwave, eliminating all the hostiles.[18]

Kazuya praises Sosogu usefulness and Sosogu begins crying tears of happiness before Kazuya begins to to collapse. Sosogu explains it as a side effect of overusing her liquor which will cause him to lose restraint. Kazuya attempts to warn Sosogu to keep away before asking to suck on her breasts. Though initially shocked, Sosogu agrees, wanting to be of use to Kazuya. Kazuya begins sucking on her breasts and crotch until Kiriha, Kyouka, Sosogu and Mimane arrive to rescue them. They find the two in the act and Sosogu explains what occurred. Kiriha offers her own breasts for Kazuya to suck on but the unrestrained Kazuya states he only wants large breasts.[18]

Kazuya keeps Sosogu, Shinobu, and Kyouka within Mimane's mirror when travelling to the Ookane Shirahagi Shrine. When Mimane awakens, releasing the other three, they find themselves in the dressing room of a bathhouse. They hear Kiriha and Kazuya inside, prompting Mimane to quickly strip and entering. After changing, the three find Kazuya sucking on Kokuyou's breasts while Mimane watches. Kokuyou recognizes Kyouka and confronts her along with the two other Mayoiga tsugumomo. Kyouka offers to fight Kokuyou but Shinobu stops her. Shinobu states that they do not regret their actions as they were doing what was necessary for their goal but is also prepared to accept the consequences, kowtowing before Kokuyou. Kokuyou confirm with Kazuya that he will be bringing the Mayoiga tsugumomo on his journey to Yomi, before kowtowing in return, requesting their help to revive Kukuri and putting an end to their differences once it is done. Shinobu accepts Kokuyou's terms and Sosogu and Mimane join in the bowing. They turn their heads to Kyouka, the only one still standing. Kyouka agrees without bowing, stating it is not enough to make amends for what she has done. They hear a scream, looking over to see Kiriha konchoeing Shirane Shirahabane. Kokuyou states Kyouka can repay her debt with the same method. Kyouka takes back her previous statement as Sosogu and Shinobu hold Kyouka down to be konchoed by Kokuyou.[19]

The next day, Kazuya and his party are dressed in kamui as Kukuri of Shirahagi explains the how they will be venturing to Yomi. With Shirane joining them as their guide, Kukuri escorts them all to Yomi Slope. There, they undergo the Final Water Sending Ritual to become half-dead, gaining the ability to see and enter Yomi. Before sending them on their way, Kukuri performs a water divination to assess the dangers ahead, predicting small misfortune.[20] Travelling through the Yomi Slope the group arrive at the first inspection area where they are stripped naked walk down a corridor of food meant to tempt them. Kiriha's stomach growls at the site of a large pudding set, giving them away. They are then forced to undergo the second examination, inspecting their lustful regrets. The group pass the test, making their way to the third inspection where they meet Chigaeshi no Ookami, and witness him repel a monster attempting to enter Yomi.[21]

After passing Chigaeshi, the group stop and find a place to rest. Kazuya sets Mimane down in a hidden area and the group enter her mirror world where Mimane has a house awaiting them. In their own private rooms, Sosogu pleasures herself. The group and then all the girls except Shirane go take a bath together. While bathing Shinobu proposes they sleep with Kazuya in shifts to distribute his spiritual power evenly amongst them. Kiriha is against it but they play janken to decide who will go first, resulting in Shinobu winning.[22] Before going to sleep, Shinobu rushes in Sosogu's room, worried something sexual might happen between them while she is sleeping with Kazuya. Sosogu states Shinobu is worried she is going to unleash her true self which Shinobu strongly denies. Shinobu requests Sosogu's Four Calms Liquor. She warns gives her and extra bottle in case the effects wear off but warns her drinking multiple doses in succession. Sosogu, Kyouka and Kiriha find and enter Mimane's private room where she is spying on Kazuya and Shinobu. They watch the events unfold, Sosogu growing flustered watching it. The next morning Shinobu denies anything happening when confronted by the group.[23]

Continuing their journey, Sosogu, Shinobu, and Kyouka stay inside the mirror while the others continue travelling. Kyouka, Shinobu and Sosogu are released by Mimane to defend herself from the bandits known as the Yomi True Phoenicies. While they successfully dispatch a few of the bandits, Mimane is grabbed by Kamuado who challenges Kazuya to a duel for her return.[24]

Lake's Essence Vessel (,, Kokouki): Sosugo is able to create various drinks that have different effects on the user when consumed by them. The beverages can be drunk directly from the bottle or poured onto a sakazuki for larger dosages.[11] The liquors powers cannot not be combined with each other, but their effects can be strengthened at the risk of incurring side effects.[1] Sosogu is also capable of creating non-alcoholic versions of her drinks.[16] Similar to normal alcoholic beverages, overusing the liquors has the side-effect of causing the drinker to lose their restraints, even the supposedly non-alcoholic versions.[18]

Sosogu on the spine of Volume 23 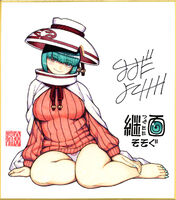