Sunao Sumeragi (皇 すなお, Sumeragi Sunao) is the only heir of the Sumeragi Dojo, a school that teaches the Sumeragi Style known as undefeatable. She is the partner of the Katana Tsugumomo Kotetsu, passed down to her after her brother's death, and became the Exorcist of Komiya under the guidance of the God of the Land Honoka.

Sunao is a young teenage girl with a short red hair and eyes of the same. She often sports a serious expression that displays her a very unfriendly disposition. Her attire is often fairly simplistic, either consisting on the regular school uniforms or a sleeveless shirt with jeans or shorts.

An extremely straightforward and outspoken person, Sunao is noted for being very direct and quite hot-blooded. When she gets fixated on something, she becomes determined and resolved on accomplishing without putting much thought on her actions. She has a tendency on acting on impulse and is quite short-tempered, which leads her to behave in ways she might repent later on when calmed down. When blood rushes to her head, it's hard to convince her to stop, often making unnecessary enemies or making bold decisions. She is very honest and feels no shame in expressing what she thinks openly, even if it comes off as rude. 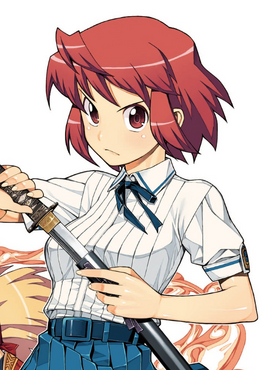 She idolized her brother and loved him very much, believing him to be a perfect fighter and blaming Kotetsu for his death. Prior to her encounter with Kazuya, Sunao had a negative opinion of Tsugumomo, believing them to be mere tools and ridiculing the idea of treating them as partners, displaying a very condescending and disdainful disposition towards Kotetsu. She is a very confident and assertive individual, as well as overly prideful and self-assured in a way that she tends to underestimate her opponents. She likes to prove her superiority to others and lecturing them for their mistakes, enjoying a position as a teaching figure. She has a sense of fair play and honor, making sure that a duel takes place on equal conditions so that she can boast of her victory being entirely on a fair ground. She treats those on a higher position than herself, like the Gods of a Land, with a lot of respect and humility, following their guidance and taking their instructions very seriously. Sunao has a rather peculiar relationship with her mother, who is the only one that inflicts a deep fear on her. She is largely incapable of disobeying her orders, as she fears her "punishments".

Following her duel with Kazuya, she learned to appreciate more her partner as an ally and companion, resulting in her expressing a desire to change her relationship with Kotetsu to treat him with more respect. She also came to develop strong romantic feelings for Kazuya, noticing him to be remarkably similar to her deceased brother. She usually tries to hide and dismiss such emotions and any hint she could give though, but she's quite easily found out by those sharp enough to notice, like her mother.

Sunao was born from the marriage between Suzuri Sumeragi and Susumu Sumeragi as the second born of the Sumeragi Family. Because her family runs a dojo that teaches the Sumeragi Style of Swordfighting, she was trained since a young age in swordplay along with her elder brother Suou. She came to greatly look up to her brother as she grew up, especially after he became the Exorcist of Komiya after passing Honoka's test. However, one day, her beloved brother lost his life fighting an irregularly powerful Amasogi. Filled with sorrow and a desire for revenge, she demanded Honoka to hand over a powerful Tsugumomo she could wield so that she could murder her brother's killer, a petition that was refused by the God of the Land as she was far from being on a level good enough to defeat the Amasogi. The stubborn Sunao ignored Honoka's words and went to meet with her brother's previous partner, the Katana Tsugumomo Kotetsu, who was in deep grief for his wielder's demise. Sunao blamed Kotetsu for Suou's death, claiming that he his weakness was the reason for his defeat, and declared that she would wield him instead to get her revenge against her "Nemesis" (as she called him).

She immediately headed to the place where the Amasogi was last seen, only to find out that he fled and entered into the region of Kamioka, which is protected by another Exorcist. She quickly rushed to the other region as she hated the idea of another Exorcist killing her nemesis, but upon doing so she encountered Kanaka Kagami fighting against the Amasogi and killing him in a single blow. Unsatisfied over not being able to avenge her brother herself, she attacked Kanaka, only to get knocked out by her Tsugumomo partner Kiriha. After waking up, Kanaka managed to calm her down and listen to her circumstances, quickly sympathizing with her. However Sunao was less than happy with the outcome and declared that since Kanaka killed her nemesis, she would become her nemesis from that day. Kiriha was confused by her declaration, but Kanaka accepted nonetheless, stating that she will be ready to take her challenge any time and that she will be waiting for her.

After that event, she started training in order to surpass Kanaka and challenged her many times, but was never able to lay a scratch on her. In order to hone up her skills she enlisted on Tsuzura Temple, a facility designed for training Exorcists. After spending a couple of years focused on her formation, she returned to Komiya and took the test of the God of the Land Honoka to be officially recognized as a regional exorcist.

A few day prior to Kazuya Kagami's battle with growth amasogi, Sunao and Kotetsu completed Honoka's test to be officially recognized as exorcists. During the test, Honoka launched her the extremely powerful attack "Flame of the Heavens", confident that Sunao would be able to block it. In order to do so, she employed her ultimate technique "Hibakari", which satisfied the God of the Land and officially approved her as an Exorcist. She offered her to become the exorcist of Komiya, but she temporarily refused, as she wanted to test her skills with Kanaka on Kamioka first, leaving with the idea of challenging her. Upon arriving however, she was disappointed upon not being able to find Kanaka anywhere and coming across the inexperienced rookie Kazuya replacing her as the Exorcist of the land. Sunao watched Kazuya defeat the Kamioni and went to see Kukuri about to find out about Kanaka.

Expert Combatant: Despite her young age Sunao is a fairly experienced and very talented Exorcist who has devoted years of training to get to the level she is. As the daughter of the Sumeragi Family, Sunao was trained in the Sumeragi Sword Fighting style by her mother, displaying a great amount of expertise and skill at swordplay that allows her to make use of Kotetsu's abilities to a very notable extent. She's able to use a katana with precision and grace, to the point of being able to block attacks with the handle, which Honoka describes as "elegant". She also has a great instinct for battle, being able to analyze the situation even in the heat of the fight and quickly learn from her mistakes in order to develop a counter-strategy. Honoka claims that few Exorcists can match her skills and describes her as "terrifying talent", but she has a tendency of getting overly confident and underestimating her enemies. She was also held back by her poor treatment of her partner, which allowed her to grow immensely after developing a closer relationship with Kotetsu. Beyond her skill as a sword fighter, she's also quite proficient as a martial artist, and easily surpasses Kazuya in this regard.

Refined Spirit Power Control: Beyond her two basic attacks of Ground Slash and Air Slash, Sunao has a refined control over the amount of power she employs on these techniques, which allow her to have more versatile uses. Thanks to this she's able to reduce the sheer power of her ranged Air Slashes in order to increase their range accordingly, allowing her strikes to gain more unpredictability as it is impossible to tell how far they can reach. It also allows her to cast consecutive Air Slashes through this method. Honoka claims that this is a very advanced technique.

As the owner of the katana Tsugumomo Kotetsu, she is able to make use of several of his abilities.