Episode 1
Tsugumomo (つぐもも, tsugumomo) are a type of Tsukumogami very different to the troublesome Amasogi. Like with all tsukumogami, tsugumomo were originally an object or tool that gained life thanks to the influence of the humans and the Curse, but unlike amasogi, who are created spontaneously from impulsive desires, tsugumomo are born after many generations of usage. After an object has been used for many years by multiple people, a part of those users' souls flows into the item, eventually allowing it to have a soul of its own. They differ from Amasogi in that they achieve supernatural powers through accumulation of pieces of their users' souls while Amasogi achieve supernatural powers through accumulation of curse.

There is no limit on the type of object, as any tool can potentially become a tsugumomo some day and only time is needed for the manifestation to take place. However, since it is an event that requires so many years to take place, it usually only happens to objects that carry a strong sentimental value, like family relics or mementos, though it might also occur with useful tools that have remained useful for a large number of years without being discarded.

Due to the wildly different and more gradual and steady process that resulted in the formation of the tsugumomo, they are a lot more stable and rational than amasogi. They have self-awareness, are capable of rational thinking and have feelings, emotions and personalities of their own, making them very akin to humans. They have a humanoid body with organs and blood running through their veins, and any wound received on such a body produces the same consequence it would on any regular person. Typically, tsugumomo form different appearances based on the object they originally were, having a unique attire of their own and sometimes developing more abnormal traits like different eye pupils or tattoos. Though some tsugumomo may appear older than other, the passing of time appears to have little effect on their appearance. If a tsugumomo uses too much power, they may regress to a younger appearance. As tsugumomo gain a human body upon their 'birth' and roughly the same anatomy and body structure as humans, it is entirely possible for a tsugumomo to be impregnated by a human and give birth, as in the case of Ouhi Oriobana.

Though they will eat and seek out food, their primary requirement for survival is the spiritual power of a human. They get it by being owned by one, typically the human they were first manifested with, or someone related to that person. If tsugumomo do not get spirit power on a daily basis, they would quickly drain out their energy and stamina until they return to being a regular object. This is synonymous with death for tsugumomo, as it is unlikely for them to turn back into a tsugumomo after this. If a tsugumomo receives damage fatal to humans while in their human forms, they die and revert to their object form in a destroyed state. If they are damaged beyond repair while in their object form they will die.

Since tsugumomo are originally created thanks to the influence of humans, most are initially very willing to serve their owners. However, as tsugumomo are as varied as humans are in terms of personality, their relationships with humans can vary wildly depending on their personality and the treatment of their owners. Due to their supernatural abilities, tsugumomo make the ideal partners for exorcists who wield them in combat to deal with aberrations. For tsugumomo that were originally weapons, this is a great source of pride and enjoyment. As they are forced to have an owner in order to survive due to the need for mysterious power, they usually don't go against their nature, but plenty of tsugumomo have revolted against their masters due to mistreatment on their part, as many humans do not see tsugumomo as emotional beings but merely tools for them to use, resulting in many abusive relationships between tsugumomos and their masters. Some tsugumomo hate humans due to this, which has resulted in groups like Mayoiga being formed. Even among humans, the treatment of a tsugumomo is a polemic subject to the point that different factions within Tsuzura Faction have been formed over opposing stances.

As a tsugumomo, revealing one's true form is seen as a sign of good will, as knowledge of such gives away their powers and weaknesses.

Tsugumomo are able to forcibly absorb the life of a human in order to replenish spirit power, becoming a Person Eater. Doing so allows them to quickly recover energy, gain great power and become independent, no longer needing an owner. Becoming a Person eater also results in them being unable to be owned again and causes their sense of self to gradually break down and become a monster. This is seen as a taboo ritual among tsugumomo, as it contradicts the reason for their very existence to do such a thing.

Fundamental abilities revolve around the physical form of the tsugumomo and require less spiritual power to perform. Such abilities being able to change between their human and object form, creating clone bodies or changing size. Tsugumomo are able to partially manifest their object bodies while in their human form, such as manifesting the blade of a weapon out of ones arm or manifest whole tool versions of themselves for themselves to use. Over time, they may develop special techniques or find new ways to manipulate their object form.

Personal abilities are more varied in nature, revolving around the tsugumomo's original form and require greater power to perform. These abilities are more unique to the individual, being of a more supernatural nature and varying greatly depending on the object. Such abilities include Saori's ability to manipulate time, due to being an hourglass or Hifumi's ability to manipulate fate, due to being a die.

Tsukumogami are able to be bound by their original form's constraints such as sheaths and covers for certain items. This applies to tsugumomo as well, including their human form, such that if they touch their original constraint, their movement becomes restricted. They are also weak to items which have symbolic significance against them. For example, the axe Genbu was momentarily paralyzed by a pair of schmidt birch chopsticks, since schmidt birch is also known as the axe breaking birch. 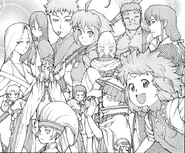 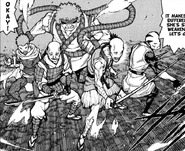 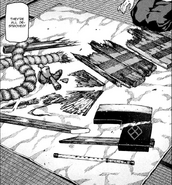 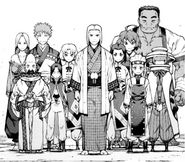 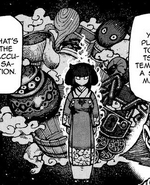